Top 6 Home Pregnancy Tests to See if You're Expecting

Eager to find out if there's a baby on board? Here, we've rounded up some of the best pregnancy tests out there for every need.
ByThe Bump Editors
UpdatedFeb 2020 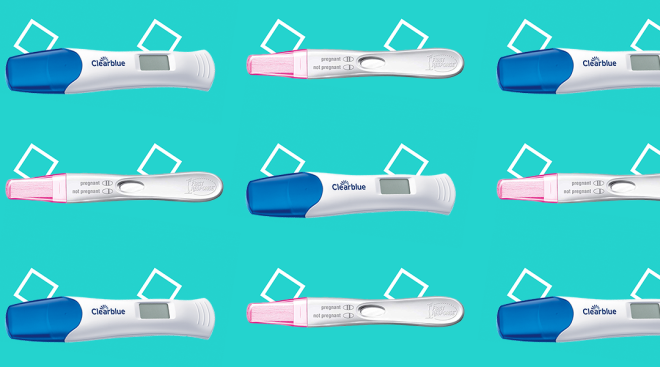 If you think you might be pregnant, there’s an easy way to find out for sure: Take a pregnancy test! You can go to a doctor’s office or hospital to have a urine or blood test done, but many women prefer to get the answer from the comfort of their home. Luckily, there are plenty of reliable at-home pregnancy tests out there that are inexpensive and easy to use.

How it works: The First Response Early Result (FRER) is your typical pee-on-a-stick test, with a curved shape and wide tip that makes it easy to use. Hold it in your urine stream and it will pick up any pregnancy hormones. Three minutes later, the test will show one pink line if you’re not pregnant and two lines if you are. (And yes, a faint line still counts as a positive!)

How accurate it is: Known as the most sensitive early pregnancy test out there (and backed up by scientific studies), the makers of the FRER say it can tell you you’re pregnant about five days before your expected period. Just keep in mind that pregnancy hormones might not have accumulated enough in your system yet (everyone’s different!), so it’s only 76 percent accurate five days beforehand, according to the brand’s testing. The accuracy increases the closer you get to your expected period. Take it first thing in the morning for best accuracy, since your urine may have more pregnancy hormones in it at that time.

Why we love it: There’s no denying the plethora of positive reviews. Both online and among our Bumpies, First Response gets the most love every time for being the most accurate pregnancy test for early results.

Bumpies say: “FRER is the best. With it, I got a positive yesterday morning at 11 days post-ovulation.” — mrs.jenni

“I got a positive using a FRER at 9 or 10 days post-ovulation. The same day I got a positive on a FRER was the day my blood test at the doctor’s office came back with an hCG level of 8.79, so I would say the FRER is super-sensitive.” — kellbelle618

How it works: To take this test, collect your pee in a cup, then use the dropper included in the kit to add several drops of urine to a specific area of the test. Two lines appear if you’re pregnant; only one shows up if you’re not.

How accurate it is: Believe it or not, this cheap pregnancy test has a better reputation on The Bump message boards than some pricier tests that use blue dye indicators, such as e.p.t., which get a bad rap for being hard to read. The maker of New Choice says it’s 99 percent accurate, but there’s no word on which day that refers to. The sensitivity of the test is said to be similar to e.p.t.

Why we love it: It’s reliable, and it’s super-affordable. How can you beat that $1 price tag?

Buy it: $1 at Dollar Tree; available online at Amazon.com for $8

How it works: Think of this as a hybrid between the FRER and the Clearblue Digital Pregnancy Test With Smart Countdown. You use it the same way as the other at-home pregnancy tests, but a screen tells you “yes +” if you’re pregnant or “no –” if you’re not.

Why we love it: The fact that the readout reinforces your positive or negative result with both a yes/no and a plus or minus sign really takes the guesswork out of it. When you’re emotional and eager to see the response, getting a clear answer can make all the difference.

Bumpies say: “First Response Gold Digital is the most sensitive digital out there.” — jluvsr

How it works: These little strips aren’t the fancy handheld contraptions you’re used to seeing. They’re more like litmus paper from eighth-grade science class. Pee into a cup, dip the stick into the urine and wait five minutes. Similar to other tests, a single line will appear if you’re not pregnant and two lines will appear if you are.

How accurate it is: The instructions say the Wondfo can detect pregnancy one day after a missed period, but some moms-to-be claim this test worked really early for them—we’re talking as soon as 8 to 10 days post-ovulation.

Why we love it: At $0.33 a strip, you can’t beat the cost here. If you’re someone who wants to test frequently, at least you won’t feel guilty blowing through these strips, especially since 50 come in a box.

“I liked the Wondfos because I could use them 10 times a day and not feel bad about wasting them.” — mimaloo

How it works: Pee on the wide absorbent tip, then wait. Impatient for a result? A progress bar is displayed on the digital screen so you know the test is working. After three minutes, it’ll switch to “pregnant” or “not pregnant.” It doesn’t get easier to read than that, right?

Why we love it: When you’re impatient to get your result (and who isn’t), the countdown progress bar is an awesome feature—you get the reassurance that it is in fact working, and you know exactly when you’ll get your answer.

Bumpies say: “I really liked the Clearblue Digital. I like that it’s either ‘yes’ or ‘no’—there’s no trying to figure out if there’s a line or not. I even ended up with a super-early positive: nine days post-ovulation.” — MrsRenee

How it works: First Response’s two-in-one kit offers seven ovulation tests—one for each day of a full week—that can predict the two days of the month you are most fertile, along with a First Response Early Result pregnancy test.

How accurate it is: The brand says that both its ovulation and pregnancy test are over 99 percent accurate—and they have the highest reviews across the web to prove it.

Why we love it: When it comes to an all-in-one package, it doesn’t get any easier than this. It tells you when you can get pregnant and then if you’re pregnant, which is all the info you really need.

Real moms say: “The test is quite simple to read, as long as you follow the instructions. My cycle is not regular, so tracking ovulation was difficult for me. But with these tests, I got pregnant after two months! They really do work, and are perfect for irregular cycles.” — Aimee, Amazon reviewer

“I went to the doctor when First Response said I was ‘peaking,’ even though the ones they gave me still read ‘negative.’ Almost 36 hours exactly, I ovulated, as indicated on ultrasound, so well done FR.” — Shie, Amazon reviewer

Sara Twogood, MD, FACOG, is a board certified obstetrician-gynecologist at Cedars Sinai Medical Center in Los Angeles. Previously, she held a faculty appointment at USC Keck School of Medicine and practiced general OBGYN in an affiliated private practice. Twogood is also the author of Ladypartsblog.com, which covers topics relating to fertility and pregnancy, and the founder of FemEd, a program designed to empower females through health education.

Disclosure: This post contains affiliate links, some of which may be sponsored by paying vendors.

This Is Way More Than Just a Pregnancy Test

A New Kind of Pregnancy Test: Your Partner Finds Out First

Q&A: What Is a False Negative?

6 Smart Ways to Deal With a Negative Pregnancy Test

Have You Heard of the Toothpaste Pregnancy Test?

Whoa! a New Home Pregnancy Test Tells You How Far Along You Are

What Is the HCG Hormone?

The Future of Pregnancy Tests: a Flushable Option

How I Knew I Was Pregnant—Before I Got a Positive!