While it may be an inconvenience for mom and dad (Sorry!), there’s likely no cause for concern.
ByStephanie Grassullo
Associate Editor
PublishedNov 2018 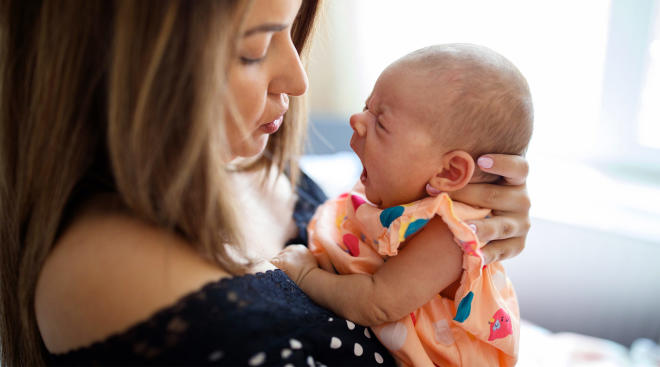 Many healthy babies don’t start sleeping through the night even when they are one year old, a new study published in the December 2018 issue of Pediatrics says. And the data looked at whether infants who didn’t sleep for consecutive hours were more likely to have problems with psychomotor and mental development, and found no link between the two.

What does this mean for mom and dad? If your baby isn’t sleeping through the night, it’s likely not a cause for concern just yet.

While lots of parents don’t expect their newborn to be a sleeper right off the bat, many think he’ll be snoozing through the night by the time he reaches 6 months. Not to be the bearer of bad news, but it doesn’t always work out that way. Based off of the findings in this study, a large percentage of healthy babies don’t reach that milestone at 6 months, or even at a year old.

For the study, the researchers defined sleeping through the night as either six or eight hours of sleep without waking up. Sleep measures were available for 388 infants at 6 months old, and 369 infants at one year old. Thirty-eight percent of the 6-month-old babies were not sleeping at least six consecutive hours at night, and more than half (57 percent) weren’t sleeping eight hours. Additionally, 28 percent of the one-year-old infants weren’t sleeping six hours straight at night, and 43 percent weren’t staying asleep for eight hours.

Researchers also noted a difference between sleep patterns for boys and girls. At 6 months old, a slightly higher percentage of girls than boys slept for eight hours straight.

The (semi-) silver lining? The study found no correlation between infants waking up at night and the mothers’ postnatal moods. Plus, they saw the babies who didn’t sleep for six or eight consecutive hours had a significantly higher rate of breastfeeding.

The takeaway? If your baby isn’t sleeping through the night, you’re not alone. While the study suggests there is nothing for you to worry about just yet, here are a few tips on how to help your baby sleep to save your own sanity.

How Do I Implement a Nighttime Bedtime Routine for My Toddler?

Sleep Training Baby Worked for Us Because We Had A Routine

Can a Baby Be Too Sleepy?

​Parental Sleep Deprivation Summed Up in One ​Crazy Graph

Why Did My Newborn Change From Sleepy to Cranky?

When Should I Stop Swaddling?